From the first experiments with drawing, painting, cut-outs and collage, which projected him into the world of art, Chico Liberato made a long journey, with dense incursions. His restless spirit led him to break through the limits of canvases and take his art into tridimensionality, into objects and sculptures, also giving it movement, through animation cinema.

The incessant search for expression led him to research that resulted in a rich collection in different formats, always in dialogue with what was impregnated in his soul: nature as an endless source of beauty, the relation of man with that which transcends him, the pain of existing among so many inequalities, the fullness of living in tune with what is sacred to him.

And what was sacred to Chico was the harmonious co-existence between beings and the expansion of their senses, expressed in the explosion of colours that his work came to incorporate. Whether in abstracts or in the concreteness of images, his themes are full of Brazilities and imbued with universal meaning. He contemplates the three ethnicities that constitute our people, the different manifestations of religiosity present in our country, with equal space given to folklore legends and mythology.

Totally identified with the backlands landscape, Chico transcends references from the caatinga, with animals, peoples, strivings, struggles and stories into which, relating a particular way of life, the whole world fits. 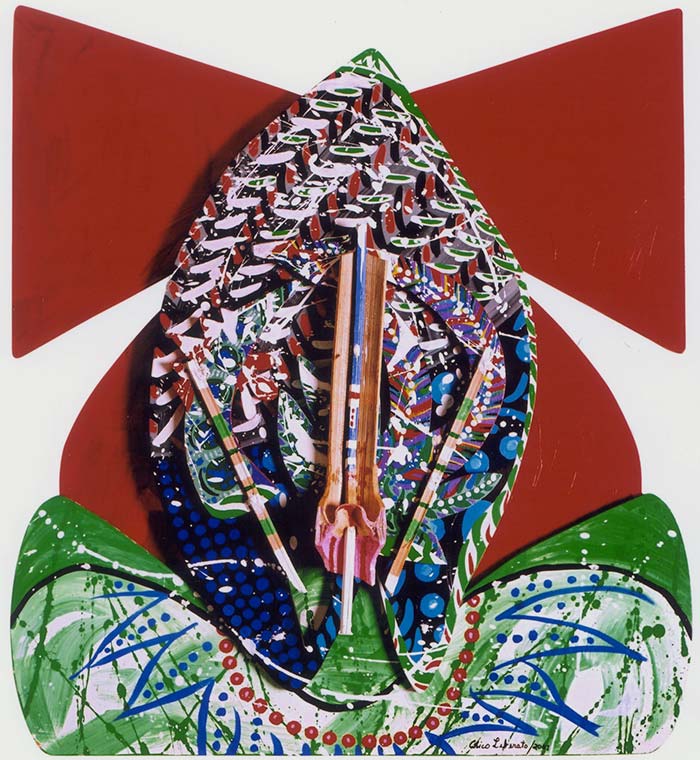 Chico Liberato’s production moves between plane and space: it goes from two-dimensional unity to tridimensionality, it gains expression in the movement of bodies and fuses with music in artistic installations. His work, divided between paintings, objects, sculptures, possesses cohesion and organicity, and translates his constant dissatisfaction and search for new materials and forms of expression, which account for the way he sees, feels and understands the world.

After 1968, the dictatorship established in the country stopped investments and censored works of art, causing the stagnation of production, mainly the exploration of daring themes, of so-called engaged art. Exhibition spaces were closed, works destroyed, artists persecuted. Chico Liberato’s experiments with animation go back to 1972, the year of the 1st Jornada de Cinema de Bahia festival. His interest was sparked by a casual encounter with Guido Araújo, who was responsible for the festival and who gave him the idea. That was enough for the artist’s restless soul to awaken to the possibility of animating his drawings and giving his characters a script.